The Hotel in the Clouds celebrates its milestone anniversary with a reimagining of Canada’s aurora borealis. 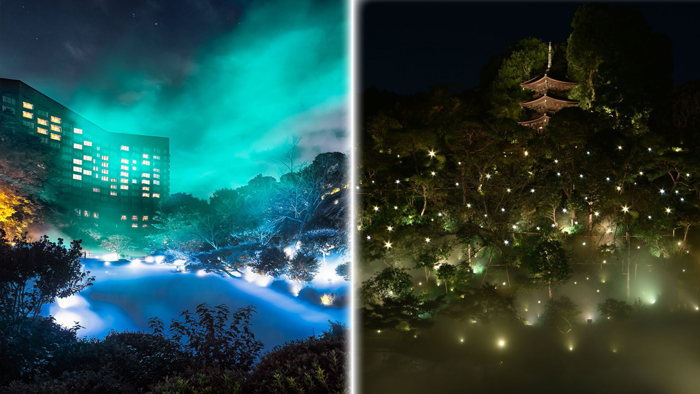 November 29, 2022, Tokyo – Hotel Chinzanso Tokyo is hoping to make this winter just a bit brighter. The limited-time light show, ‘Wishing Star Anniversary Flash’, accompanies an updated version of last year’s popular ‘Forest Aurora’ show, which recreated the northern lights in Chinzanso Garden. Both are part of the Garden Project, a series of special events to celebrate the hotel’s 70th anniversary.

This year's new and improved Forest Aurora display features the northern lights of Yellowknife, Canada. The seven-minute show includes more green and blue tones instead of red, which are common in the spring. The Wishing Star Anniversary Flash offers a moment of reflection immediately following the bright blue and green hues celebrating the holiday season. The garden transitions into a more mystic, spiritual atmosphere as the slopes of the garden darken and sparkle, celebrating the hotel’s anniversary. The event continues for three months from November 11th, 2022 to February 7, 2023.

The hotel offers various plans and packages that coincide with the anniversary event. Its accommodation plan includes a private viewing of the Forest Aurora. A maximum of six groups can visit the garden after-hours, an exclusive perk available to the select groups. Hot drinks in the hotel's custom tumblers are also provided, so guests can relax as they enjoy the spectacle.

There is also an exclusive ‘Aurora Evening High Tea’ course available at lobby lounge Le Jardin. The menu includes a welcome drink, which is a champagne cocktail with colors inspired by the northern lights. Aurora-themed treats are also available until Christmas Day, while Anniversary Flash-themed treats will be available from December 26 onward. Available at the hotel shop is the cloud biscuit roll cake, originally created to commemorate the second anniversary of the Tokyo Sea of Clouds in October 2022. The winter edition incorporates both the sea of clouds and the northern lights.

For more information on Wishing Star Anniversary Flash and the Forest Aurora, please contact Hotel Chinzanso Tokyo via their website.

About Hotel Chinzanso Tokyo
Hotel Chinzanso Tokyo is one of the city’s most iconic luxury hotels with 70 years of history. The property includes 267 guest rooms/suites, nine restaurants, 38 meeting/banquet rooms, and a full-service spa with a Japanese onsen. Its award-winning garden has a wide variety of botanicals, including more than 100 cherry trees and 1,000 camellia trees. The standout feature of the garden is the ‘Tokyo sea of clouds,’ a recreation of the natural phenomenon that can usually only be spotted in the mountainous regions of Japan. The hotel is owned and managed by Fujita Kanko Inc., a publicly-traded tourism industry corporation headquartered in Tokyo.