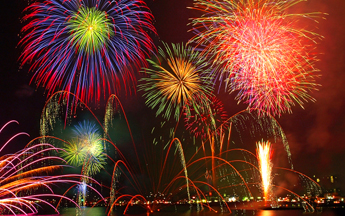 The Anjin Festival Sea Fireworks Display launches 10,000 or so fireworks from five sites on the sea in a single hour! This is accompanied by high-spirited Japanese drum performances and dreamlike floating paper lanterns. A spectacular fireworks finale resembling Niagara Falls then concludes both the fireworks display and the Anjin Festival with a bang. 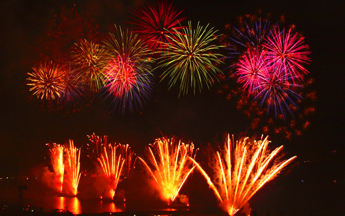 The Anjin Festival (August 8 to 10) commemorates the launch of Japan’s first Western-style sailing ship, which was constructed in Ito under the direction of William Adams (known as Miura Anjin in Japan), a diplomatic advisor to shogun Tokugawa Ieyasu in the Edo Period.

Enjoy beaches by day, fireworks by night and hot springs whenever you like while staying at Ito Kowakien hotel. It’s conveniently located about 10 minutes by car from the fireworks displays in Ito Beach.