Tourists from all over Japan and around the world visit Miyajima, an island in Hiroshima Bay, to see Itsukushima Shrine and its Great Torii Gate. The island became a World Heritage site in 1996 and has been renowned as one of Japan's three most scenic spots (alongside Matsushima in Sendai and Amanohashidate in Kyoto) since the 17th century. 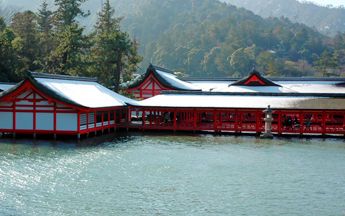 Locals built the shrine in 593 AD over the sea, rather than on the island, which they considered a god and didn't want to harm. Visitors can admire the enormous orange Great Torii Gate, which stands 16 meters tall, from the shore or by taking a boat that passes through it when the tide is high. 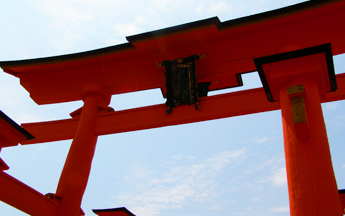 Various traditional events are held nearby throughout August. These include Miyajima's Evening Dance event (August 17 to 18), with locals performing ancient dances two nights in a row at the beach, and Miyajima Water Fireworks Festival (August 24), which launches about 5,000 fireworks offshore near the gate.

The island is also richly endowed by nature, providing beautiful attractions that vary by season, such as cherry blossoms in spring and colorful foliage in fall.

When visiting Hiroshima, there’s no better base for local sightseeing than Hiroshima Washington Hotel.