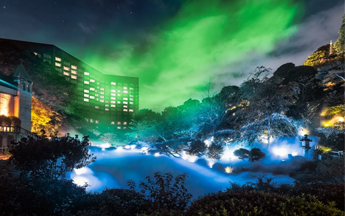 “Combining with another signature attraction of ours, “Tokyo Sea of Clouds,” guests are guaranteed to experience the magical phenomenon without leaving the big city Tokyo,” says Shinsuke Yamashita, the hotel’s GM. “Although it is still challenging to travel internationally, this will be our ongoing winter event. With “Forest Aurora” put in place for winter, we now offer exceptional scenic wonders for every season all year round. Every day of the year is the best time to enjoy our magnificent property. We are prepared to welcome back our international guests anytime.”

The hotel’s majestic botanical garden also boasts 2,300 camellia trees from 100 different species, which blossom in the winter/early spring. During the season, another feature, “Tokyo Camellia,” will be reinstalled.

Fujita Kanko, the owner/manager of Hotel Chinzanso Tokyo, opened the Chinzanso garden to the public in 1952. Leading to the official 70th anniversary in 2022, the hotel began hosting various events/programs, identifying seven seasons to showcase spectacular views of the garden and its natural beauties, which will continue as the hotel’s signature attractions.


About Hotel Chinzanso Tokyo
Hotel Chinzanso Tokyo was rebranded and opened in January 2013. It is owned/managed by Fujita Kanko Inc., a publicly traded tourism industry corporation headquartered in Tokyo, which operates 70 properties/facilities. The hotel’s facilities include 267 guest rooms/suites, nine restaurants, 38 meeting/banquet rooms, and a full-service spa with Japanese onsen. Its garden contains a widevariety of botanical species including 100+ cherry trees and 2,300+ camellia trees.